While I was traveling in Portugal and Spain this past fall I found myself taking a lot of photos with the intention of turning them into panoramas when I got back. At the time, I remembered this being a fairly quick as easy task. Well, when I sat down to go through my photos and realized that I took over 40 panorama sets (35 of them were eventually made into panos of varying quality), things weren’t quite so quick and easy. The plus side of taking so long to make my compiled panos is that I’ve learned a lot both what the photos need and what Photoshop needs to spit out a passable panorama. So with that said, here are some tips for taking and making handheld panoramas using Photoshop CS5.

A panoramic view of Malaga, Spain from September 2011. ©2011 David Petkofsky

What you need: A bunch of photos, Adobe Photoshop CS4/5 (I’m not sure if CS3 has the photomerge feature).

Tips for taking the photos

The first step to any good panorama is taking a good set of photos. The easy and expensive way to do it is to get a pano head for a tripod that motorized and takes perfectly overlapping photos of a whole scene. The other “pro” way to do it is to use a tripod and to evenly take photos throughout the scene. You’ll see a lot of tutorials online saying you need to use a tripod, or you need to do this or that. Well, that’s not quite right. Most of my panoramas are taken quickly and easily, by hand. There absolutely are disadvantages to taking the photos by hand, but nothing beats the speed and ease of just firing off 5-10 shots as you pan by hand across the scene. So here are some suggestions:

Compiling the photos into a single panorama
First, a really helpful resource for Photoshop’s photomerge tool is, believe it or not, their online help. I’ll briefly cover what they talk about there, but if you want more detail on running the tool itself, go there!

The first step is to fire up the up Photoshop and open the photomerge tool. (File – > Automate -> Photomerge) Once you have the menu open you’ll see the screen below. 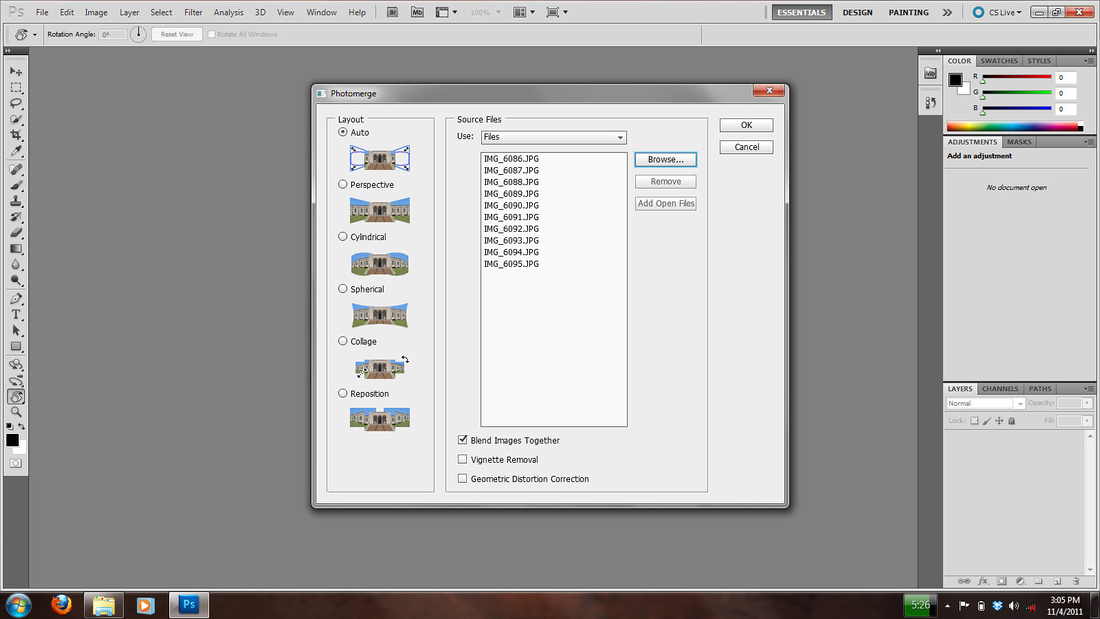 You have one primary set of options on the left of the screen – layout options. You can choose between “Auto”, “Perspective”, “Cylindrical”, “Spherical”, “Collage”, and “Reposition”. Photoshop’s basic explanations, from the online help are copied below.

Auto
Photoshop analyzes the source images and applies either a Perspective, Cylindrical, and Spherical layout, depending on which produces a better photomerge.
Perspective
Creates a consistent composition by designating one of the source images (by default, the middle image) as the reference image. The other images are then transformed (repositioned, stretched or skewed as necessary) so that overlapping content across layers is matched.
Cylindrical
Reduces the “bow tie” distortion that can occur with the Perspective layout by displaying individual images as on an unfolded cylinder. Overlapping content across files is still matched. The reference image is placed at the center. Best suited for creating wide panoramas.
Spherical
Aligns and transforms the images as if they were for mapping the inside of a sphere. If you have taken a set of images that cover 360 degrees, use this for 360 degree panoramas. You might also use Spherical to produce nice panoramic results with other file sets.
Collage
Aligns the layers and matches overlapping content and transforms (rotate or scale) any of the source layers.
Reposition
Aligns the layers and matches overlapping content, but does not transform (stretch or skew) any of the source layers. 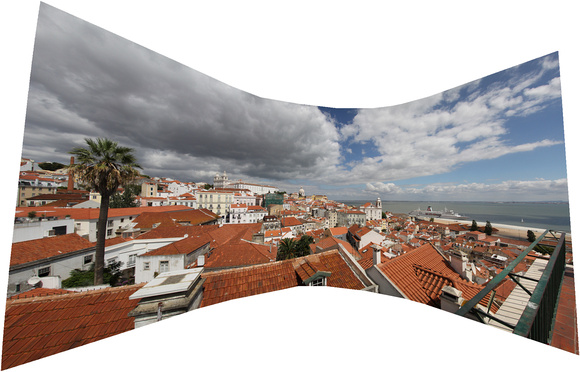 Uncropped panorama of the roofs of Lisbon, merged using the perspective mapping. 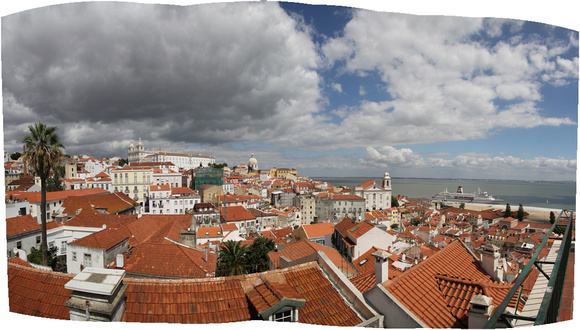 So which image is “correct”? Well, neither. In the perspective merge the right and left edges are badly stretched, most noticeable by the tiles in the bottom left corner and the railing on the right (No, the railing wasn’t that fat!). You can also see that the cruise ship is stretched a bit in the center of the image. Is the cylindrical mapping better? No, not really. The center of the image is a bit better, it’s “closer” to you and more true to how I remember the scene. However, the bottom of the image is badly warped. Notice how the roofline of the building in the foreground curves? The building most definitely did not curve like that in reality! You can also see a similar effect, although less severe, in the handrail on the right. In this case, I find the perspective mapping, properly cropped, to be the more realistic panoramic merge. I’ve cropped and posted both the perspective mapping (top) and cylindrical mapping (bottom) for comparison’s sake.

Earlier I mentioned that it’s best to take panoramas of distant scenes than close ones. It’s tempting to think that Photoshop can turn any lens into a super wide angle lens and that you can capture any scene with photomerge. Unfortunately that’s not that case. Trying to capture a near field scene exacerbates lens and processing distortions, making it much tougher to accurate represent the scene. It’s also easier to fall prey to ‘photographer-induced’ errors (i.e., screwing up on your own), like loosing track of the true horizon. For example, in the scene below I got distracted by the palace and followed that rather than the true horizon. 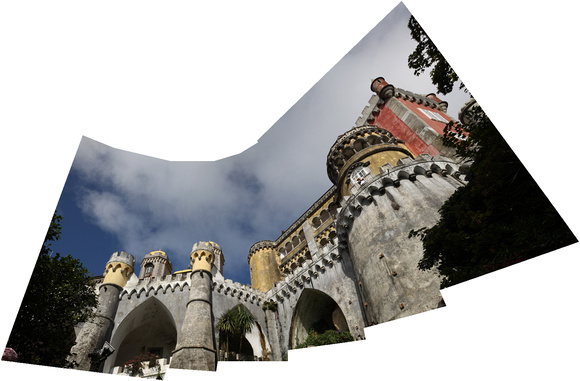 If you do want to try and use photomerge to stitch together a close image like this, I suggest shooting in multiple rows and using the most distortion-free focal length of your lens.

I’ll share one more example of a handheld panorama, this time from the top of Gibraltar. Like the Lisbon shot earlier, I tried both the perspective and cylindrical mappings when merging this image. The perspective shot, first image below, does a fairly good job in the center of the scene (actually to the right in the uncropped version). Unfortunately, it severely distorts the left side of the image. This is most easily seen in the cargo ships that are waiting in the strait, particularly the second from the left. It looks like the ship’s half a mile long! 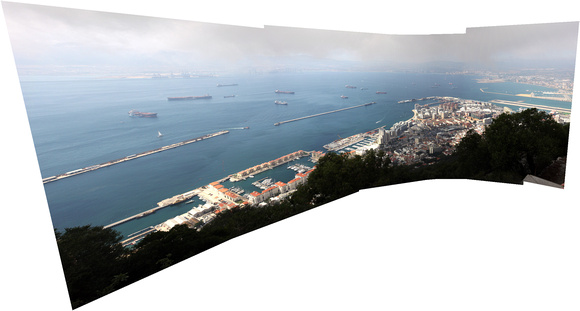 Uncropped panoramic view from Gibraltar, merged with the perspective mapping.

Unlike the earlier Lisbon pano, I prefer the results of the cylindrical mapping to those of the perspective mapping in this case. I think it does a better job of capture how I remember the scene and has less obvious distortion.

Anyway, those are a few examples and tips for taking handheld panoramas. It’s absolutely possible and it’s a fun way way to capture a unique perspective that a single frame might not be able to do. Plus, panos look best when printed and framed… just have to find enough wall space to hang it!